To help increase awareness of the future USS Cleveland and Naval history and heritage in northeast Ohio, the USS Cleveland Legacy Foundation has partnered with the U.S. Navy Memorial in Washington, D.C. to sponsor a replica of the Lone Sailor Statue. The statue was dedicated on September 10, 2021, in a ceremony at Great Lakes Science Center, the statue’s temporary location. The Foundation is working with the City of Cleveland and other local nonprofits to move the statue to its permanent location in Voinovich Bicentennial Park, scheduled for summer 2023. The Lone Sailor – Cleveland is only the 18th such statue in the world, joining other storied Naval locations including Pearl Harbor, Normandy’s Utah Beach, and major fleet concentration areas in the continental United States. Sponsorship opportunities are available. Please contact Diane Tomer, Director of Development, at dtomer@usscleveland.org. 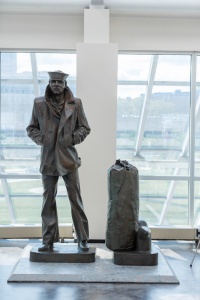 Phase II overlaps to some extent with Phase I, as planning begins when the crew of the future USS Cleveland is identified and begins training (prior to commissioning).  As a result, the Ship Sponsor and USS Cleveland team will have forged a deep relationship with the crew before the ship departs Cleveland for her homeport in Mayport, Florida and future deployments abroad.

During Phase II, Greater Cleveland will continue to support the ship and her crew by initiatives such as:

Phase III would begin as the end of the ship’s service life approaches.  If the U.S. Navy has no higher or better use for the ship, the USS Cleveland Legacy Foundation would negotiate a purchase with the goal of returning the ship to Cleveland to be docked at the Great Lakes Science Center to become a permanent museum and memorial to all four United States Navy ships that have borne the name Cleveland.