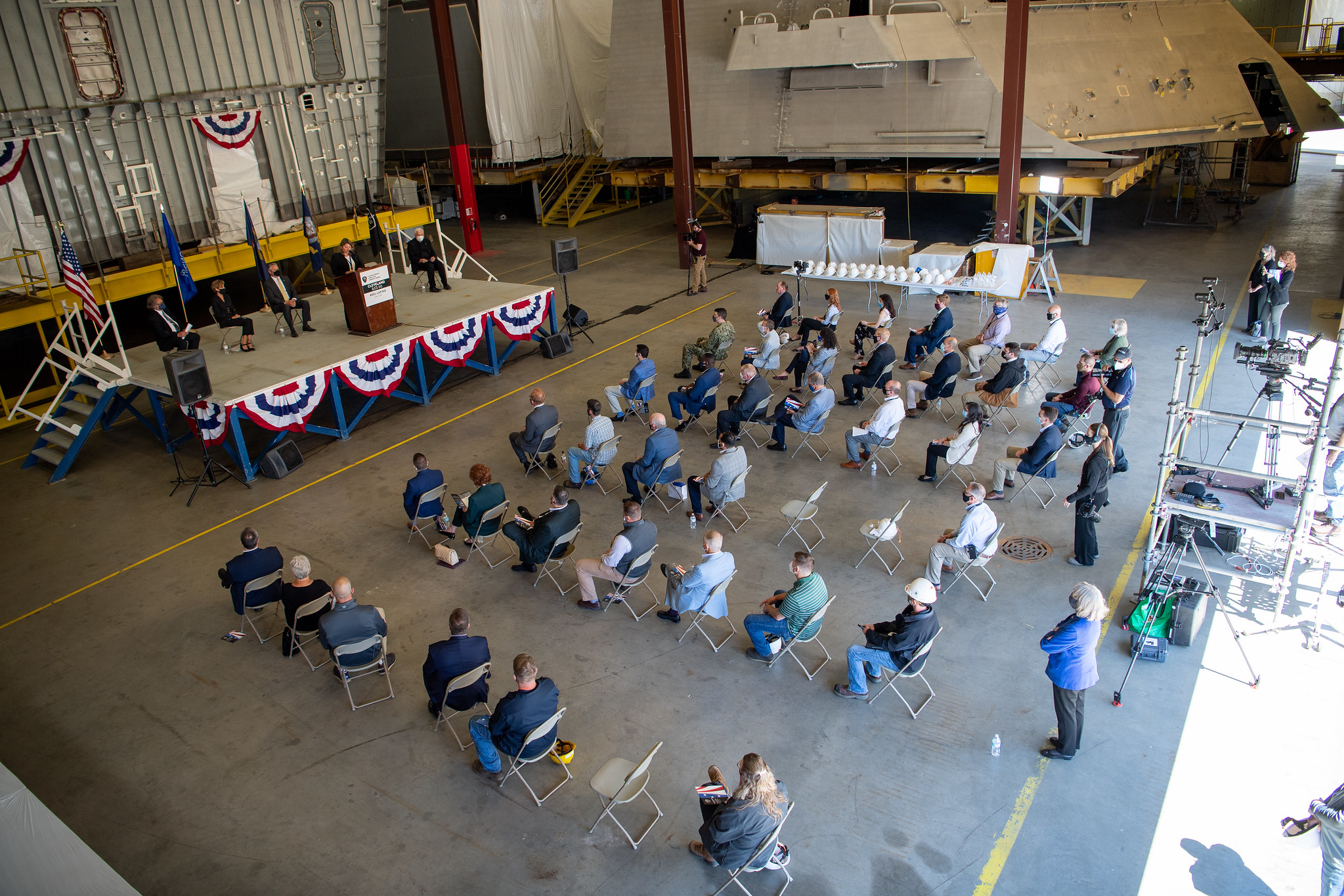 Thank you so much for the opportunity to be here today and to participate in this important, and historic, milestone for the next U.S. Navy warship to bear the name Cleveland. Most importantly, I would like to thank the great team of ship builders, engineers, designers, and executives from Lockheed Martin, Fincantieri Marinette Marine, and Gibbs and Cox. It is your heart, hands and minds that will transform this steel into a force for liberty and good around the world.

A very special thanks goes out to Ms. Jan Allman, CEO of Fincantieri and Mr. Chris Minster, Director of Combatant Ships, Integration and Test Programs at Lockheed Martin. In addition, I want to extend my sincere appreciation to Mr. Fran Thoune, the welder from Fincantieri who will use his skills to formalize, in steel, the symbolism of this event today. My additional gratitude extends to the Navy Team here on site led by Commander Jon Schiel and Mr. Brian Kriese.

I am humbled by this honor and excited about the responsibilities it brings. The tradition of keel laying is the first step in the genesis of a new ship, but in the case of the USS Cleveland it is simply the continuation of a long and proud legacy of service to our nation.

That legacy is very personal for the sailors who served on the three former USS Clevelands and for the people who call the city of Cleveland their home. Several of those people are here today.

We are honored to have a few of the many hardworking dedicated members of the USS Cleveland Legacy Foundation in the audience today. They have been incredibly generous with their time, resources and creativity, and so I would like to recognize them: our President and Executive Director, Mr. Mike Dovilla; Vice President, Dr. Karen Mahalik; Treasurer and CFO, Mr. LaRese Purnell; and Directors Mr. Craig Bashein and Mr. Matt Previts.

Representing the important role of the school system in Cleveland, we have a great innovative educator and leader, Dr. Lee Buddy, Jr., Principal of Wade Park School.

From the business community, we have from Sherwin-Williams: Maria Spangler, Director of Community Engagement.

Mr. Chris Connor, of the Connor Foundation. Chris is also the retired CEO of Sherwin-Williams.

From Lincoln Electric, we have the Chairman, President and CEO, Mr. Chris Mapes.

From Brennan Industries, we have President and CEO, Mr. David Carr.

From TransDigm, we have President and CEO, Mr. Kevin Stein.

And finally, any Cleveland/Wisconsin-associated event of such significance would not be complete without a representative of both great areas, Mr. Joe Thomas. For anyone who knows anything about the Cleveland Browns, Joe played college football here in Wisconsin, and then anchored the Browns offensive line for many years with intense dedication to his craft and selfless service to his team. These are the exact values we are proud to see in our Sailors around the world. These are the Sailors who will ultimately crew this ship and bring honor to Cleveland, just as Joe has done over the course of his career.

I thank each and every one of you, from the bottom of my heart, for your commitment to this ship. Your work will distinguish its commissioning, and its ultimate legacy in the history of the city of Cleveland, and the United States Navy.

Today is also very personal for me because my husband, Tom, introduced me to his beloved hometown of Cleveland just two weeks after we met. Quite frankly, I think it might have been a deal breaker if I didn’t share his enthusiasm. Little did I know that his love for Cleveland would continue, without wavering, over the span of almost 33 years of marriage. I also think that neither of us ever thought he would become the Under Secretary of the Navy.

Still, that position afforded him the unique opportunity to promote the idea of the importance of another USS Cleveland to reconnect the city to the Navy that protects it. His efforts were successful when his boss, Secretary of the Navy Richard Spencer, named LCS-31 “Cleveland” and honored me by naming me as the ship sponsor of this ship.

Because of that single gesture by Secretary Spencer I have had the true joy and privilege of meeting an incredible number of very precious and wonderful people who call Cleveland their home. Connecting with these true and authentic Clevelanders has been a blessing to me of immense proportion for which I will be forever grateful.

Although we spent the last 30 plus years in the Washington DC area, we always maintained a connection to city of Cleveland.  We actually drove eight hours with our four children to be first in line at the Grand Opening of the Christmas Story House on the West Side of the city in 2006. If you are from Cleveland, you would not think this was odd! Furthermore, our children had no choice but to be Browns, Indians, and Cavaliers fans. This was a good thing. It taught them great lessons about loyalty and commitment, and sometimes, about how to respond to disappointment with a sense of optimism and perseverance.

Thank you so much for being here to share in this incredible honor. May God Bless You for your passion and dedication to this project.

May God Bless the shipyard workers here in Marinette whose skills and strength will turn the vision we all share into a reality.

And finally, May God Bless the future crew of the USS Cleveland. They will rely on the strength of the keel we lay here today to keep our nation safe from harm.

Please pray for them, love them, and support them, for what they will be asked do for us. 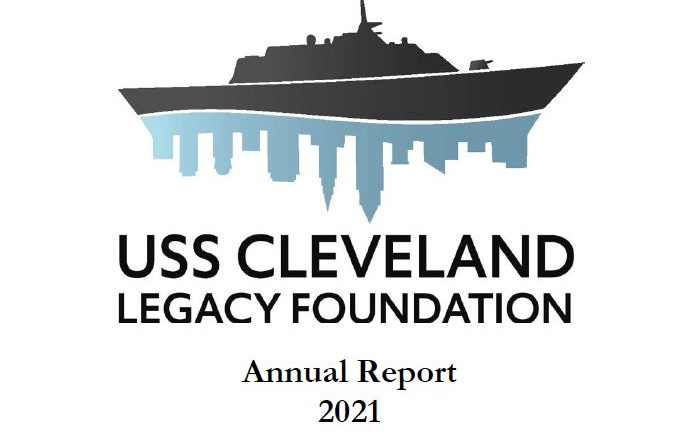 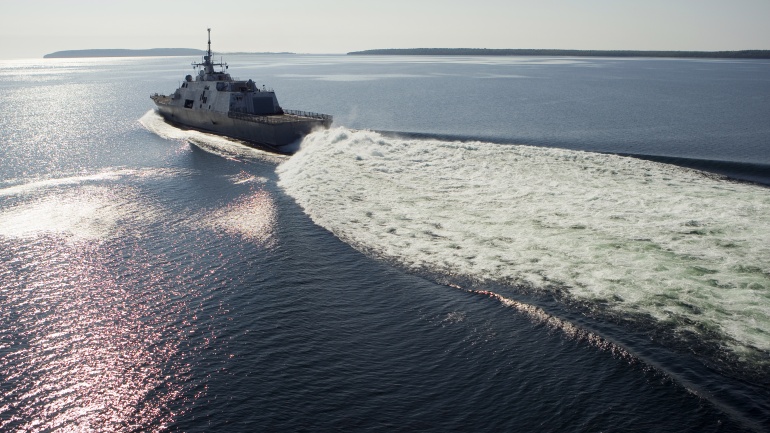